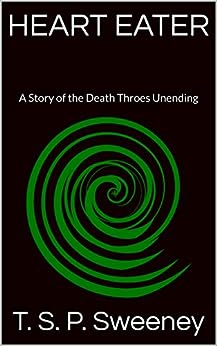 Of all the orc tribes inhabiting the barren wastes which divide the eternally warring human kingdoms, the Heart Eaters are the most dangerous…and the most mysterious.

Now a young orc named Kirai must face a journey unlike any other – an exploration of fears both real and imagined and challenges from outside and from within the depths of his very soul – as he seeks the answer to the single most important question of his young life: “Why are we called the Heart Eaters?”

This is the first story written in my new fantasy setting, the Death Throes Unending.

Heart Eater came from one of the earliest story ideas I had when I was being encouraged to get back into fiction writing by my wife Sam. It went through many iterations, but it never felt quite right until I came upon the idea of writing about that most maligned of fantasy creatures: the orc.

I’d been slowly building up my own fantasy setting based around the concept of a Tolkien-esque high fantasy world that brought itself completely undone, causing catastrophic damage to the planet and the people inhabiting it.  As a part of this setting, I particularly want to explore stories of what happens when the so-called villainous races rise up into the vacuum left by the decimation of the humans and elves and dwarves and so on.

Heart Eater came from that concept.  I wanted to craft a story examining an orc society that was at some level still as savage as it had ever been, but which had also evolved into something else.  I wanted to take the term ‘Heart Eater’ and explore the link between the literal meaning, and what that in turn represents.

On a personal note, I also wanted to write something that involved psychic visions and a main character tripping balls and questioning reality. I like to think I ticked that particular box.

With short, stumbling steps, he reached the funeral bier.  The slain warrior upon it was completely naked, the body well preserved. The wound that ended his life marked his forehead, slightly off-centre, a bloody crater indicative of a crude arrow.

The warriors guarding their fallen brother appeared almost identical in the gloom, fully armoured and with weapons in hand.  They glared, but did not move to stop him as he rested his hands gently on the corpse.

With a start, Kirai realised that the fallen warrior was not dead at all, his chest rising and falling so slightly as to be almost imperceptible, hearts beating so faintly that even the orc’s superb hearing could not detect them.

The sergeant of the funeral guard moved suddenly, proffering a dagger hilt-first.

The fear, the confusion, the anger; all of it disappeared in a single moment of clarity.

He took the dagger.

“Child Kirai,” Vafura’s voice called as if in answer to his thoughts, shattering the oppressive silence that had fallen over the clearing and shaking the initiate from his reverie. “Why are we called the Heart Eaters?”

The drums began to beat again.  Eyes locked on the dagger, flames reflecting off its silvery surface, he saw the name Polov Headtaker inscribed on the blade and he finally, truly understood.

“We eat hearts,” he whispered.

He plunged the dagger into the fallen orc’s chest.