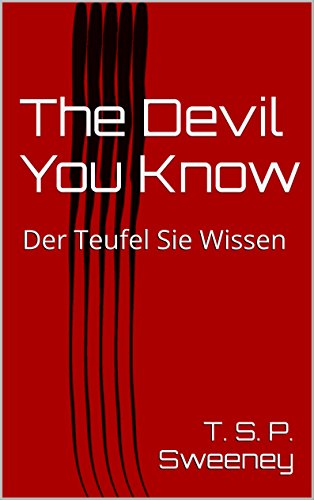 April 24, 1945. Berlin has been invaded by Soviet forces. The fall of the city is inevitable, but resistance is fierce and every inch of ground is being paid for in blood. Deep behind the Russian lines, a small group of Hitler Youth volunteers hunt the enemy on behalf of their SS masters, seeking to be the monsters that haunt the dreams of their enemies.

Little do they realise, however, that there are nightmares far more dangerous than they stalking the shadows of the ruined city. As the war in Europe draws to a bloody close, a new war – a war unending – has only just begun.

Praise for The Devil You Know (Der Teufel Sie Wissen):

This was another of the fantastic short stories and one, which I believe the author should think of expanding into a longer novel. With an ending that is not only superb but also promises of further tribulations. This story left me wanting to know more of the world within and war to come… – Fantasy Book Critic

Andreas stared at the brown-brick building. It brooded at the end of the street, crouched amongst the surrounding buildings like a spider. It remained untouched by the Soviet shelling, and yet was still as dark and decrepit as any war-time ruin.

It was quiet and difficult to approach from the street without being detected; perfect for a clandestine meeting.

It was also perfect for murder.

Lukas came to a halt and turned back to the rest of the squad, a thumbs-up accompanying his familiar grin as their target effectively isolated himself from any chance of rescue.

Andreas’ return smile was more of a grimace. Nothing was ever this easy.

The squad dropped as silently as possible to street level, running across and moving into the alley behind the old barber shop, which had belonged to Gregor’s father.

Andreas allowed the other boy a moment to stare wistfully at the ruins of his inheritance before gently dragging him away. Gregor shook off his melancholy and pushed the ladder into place, allowing Lukas to lead the way to the rooftops.

They hurried silently to the factory wall, leaping the small gaps between the tightly packed houses. Andreas watched as Lukas forced one of the second-story windows, the glass making an almost imperceptible squeal. With great care, the red-headed teenager slipped through the narrow opening and onto a mesh catwalk, making not a sound.

Where? Oswald signalled once they were all clustered together inside.

Andreas’ eyes had adjusted enough to the darkness inside the factory that it was no longer a pitch-black void. Instead, it was filled with the deeper shadows of chemical vats and assembly lines, punctuated by hulking presses and other cluttered machinery.

The victim was nowhere to be seen.

Andreas partnered up with Dolf and moved carefully along the ancient, rail-less catwalk toward the eastern wall of the building, trying not to think about what it would mean to fall.

The old vats clustered on that side of the factory would make a perfect ambush point if the target realized he was being followed, and Andreas was in no mood to take risks. He watched as Oswald and Fabian headed toward the offices along the north wall. Lukas and Gregor slid down the nearest ladder, moving to investigate the scattered hiding places on the floor.

Andreas felt pride at the competent efficiency with which his squad worked, effortlessly moving to cover the whole facility without any further instruction. They had truly come a long way under the tutelage of the Scharführer.

He smiled at Dolf, the stocky youth giving him a toothy grin in return. Andreas had no doubt similar thoughts were going through his friend’s head.

Andreas crept further toward the chemical vats. He had taken only a few steps when he sensed he now moved alone.

Dolf stood perfectly still, grin splitting his face. His gun was clutched tightly in his hands, held against his body. Andreas frowned as he noticed his friend was shaking, almost vibrating. The stock of his shotgun rattled against the buttons of his coat.

What is it? Signalled Andreas, furious at his friend for breaking stealth. Was he panicking?

“Dolf,” Andreas risked a whisper, shaking him by the shoulder.

Originally published in Fading Light: An Anthology of the Monstrous – Edited by Tim Marquitz.  Published by Angelic Knight Press.